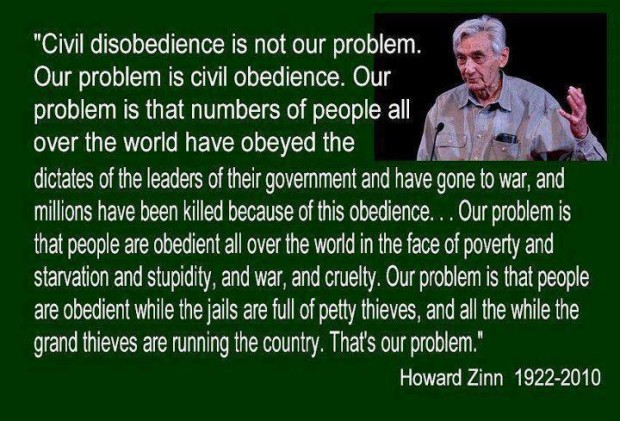 Howard Zinn was a historian, author, professor, playwright, and activist. His life’s work focused on a wide range of issues including race, class, war, and history, and touched the lives of countless people.

Zinn grew up in Brooklyn in a working-class, immigrant household. At 18 he became a shipyard worker and then joined the Air Force and flew bombing missions during World War II. These experiences helped shape his opposition to war and his strong belief in the importance of knowing history.

After attending college under the G.I. Bill, he worked as a warehouse loader while earning a Ph.D. in history from Columbia University. From 1956 to 1963, he taught at Spelman College in Atlanta, GA, where he became active in the Civil Rights Movement. After being fired by Spelman for his support for student protesters, Zinn became a professor of political science at Boston University, where he taught until his retirement in 1988.

Zinn was the author of dozens of books, including A People’s History of the United States, the play Marx in Soho, Vietnam: The Logic of Withdrawal, and SNCC: The New Abolitionists. He received many awards including the Lannan Foundation Literary Award for Nonfiction, the Eugene V. Debs award for his writing and political activism, and the Ridenhour Courage Prize.

Howard Zinn giving evidence at the trial of the Seven AVCO Ploughshare members who in 1983, invaded AVCO Systems Division, a manufacturing plant for MX and Pershing 11 missiles in Wilmington, Massachusetts. Damaging weapon parts in a protest against the build-up of nuclear arms.

acknowledgements to BeyondNuclear.org for the video.